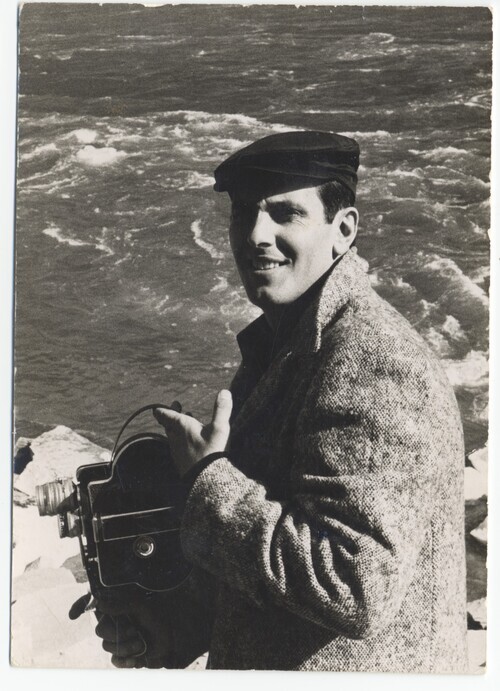 Karl Spreitz was a documentary and experimental filmmaker, graphic artist, and photojournalist. He died in Victoria on May 13, 2016 after a lifetime of contributions to contemporary art and documentary film in Western Canada.

Born in Gratz, Austria, in 1927, he taught himself filmmaking while assistant coach to the Women’s Olympic Team of Austria. Spreitz immigrated to Canada in 1952; Spreitz along his wife Ina Schäffer (later Mayer von Bojan) moved to Victoria in 1959. He worked as a staff photographer for Beautiful British Columbia Magazine, and cameraperson for a number of television broadcasters, in addition to his work as a filmmaker.

He was one of the original members of the Society of Limners, formed in 1971 by Maxwell Bates. He frequently collaborated with friends and fellow Limners for films and other projects: his collaborators in film included Colin Browne, Vicky Husband, Anne Mayhew, Michael Morris, and Herbert Siebner. He produced a significant amount of portraiture, notably in collaboration with artist Myfanwy Pavelić.

While his most renowned films were cultural, historical, economic, and environmental documentaries, he also created artist spotlights for Limners members, worked in the experimental film genre, and produced numerous commercials throughout his career, as well as collected commercials as part of his interest in the genre. His artworks are expressionist in form; through drawing, painting, photo-collage, and later through digital media, Spreitz explored the human figure in unique ways, often combining figures with geometric shapes or mechanical imagery.

This digital collection consists of a selection of Spreitz’s documentary films, film outs, and commercial footage. Additionally, selected photographs, art works, textual records and objects from his archival fonds have been digitized to provide additional context to Spreitz’ life and works.