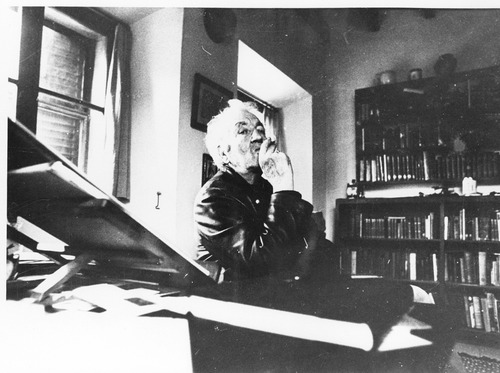 The photographs in this collection were taken to supplement the July, 1975 edition of the University of Victoria's Malahat Review, issue number 35. The edition was subtitled "A Gathering in Celebration of the Eightieth Birthday of Robert Graves".

Not all the photographs contain proper identification. Where possible, credit to the photographer has been given. The Malahat Review credits four photographers specifically: Laszlo Kery, Jeffrey Craig (Claddagh Records), Douglas Glass, and Lloyd Borguss.

No credit is given for the image GRA-101-023, which is a photograph of a photograph. The original photograph is dated 1877 and depicts Leopold Von Ranke, the historian, variously described as Graves' maternal grandfather or great uncle.