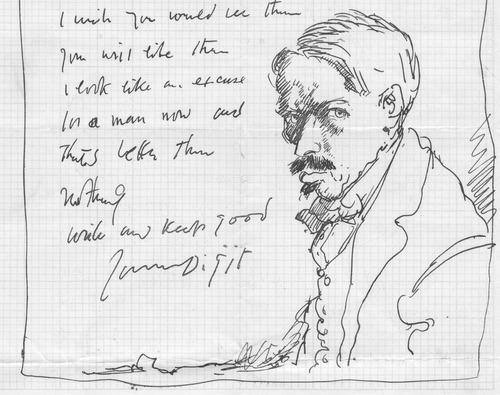 The collection consists of 36 letters from Sir William Orpen to Beatrice Elvery (Lady Beatrice Glenavy), all illustrated with ink or pencil sketches.

Sir William Orpen was born in Dublin in 1878. Although he has become a neglected figure in art history, between 1910 and 1930 he was considered one of Europe's most renowned portrait painters. He was accepted into the Metropolitan School of Art in Dublin at age 13, and at the age of 18, entered London's Slade School where he studied under Henry Tonks. Orpen's friends at Slade included the painter Augustus John.

In 1901, Orpen married Grace Newstub whose portrait he painted in 1907. They had three daughters, although the marriage was unhappy. Orpen returned to teach at the Metropolitan School of Art during the years between 1902 and 1914. He was made an Associate of the prestigious Royal Academy in 1910.

Orpen's teaching tenure at the Metropolitan School of Art was interrupted by the outbreak of World War One. In 1916, he received a commission in the Army Service Corps to serve as a war artist, and in 1917, he was sent to the Western Front. It was during the war that Orpen contracted several of the illnesses that were to later affect his health, including blood poisoning and Influenza. Orpen was knighted in 1918.

After the war, Orpen caused some degree of critical and public controversy with his painting To the Unknown British Soldier (1919). Although he had been commissioned to paint portraits of the politicians at the Versailles Peace Conference, his anger at these same politicians--for what he felt to be their betrayal of the average solider--led him to paint this politically contentious work instead. However, Orpen did complete his commission The Signing of Peace in the Hall of Mirrors, Versailles, 28th June which now hangs in the Imperial War Museum in the U.K.

Orpen's artistic output was substantial: his works are part of collections in both North America and the UK. Many of Orpen's portrait subjects, friends, acquaintances and military associates were key figures in early Modernist politics, art and literature.

His published writings include: An Onlooker in France (1921) and Stories of Old Ireland and Myself(1924).

William Orpen died in 1931 at the age of 53, the result of continuing poor health and alcoholism.

Beatrice Glenavy (1883-1968) nee Elvery (aka "Bridgit") was a friend of Orpen's from The Metropolitan School of Art. Initially they were students together but later, when Orpen returned to the school to teach, Glenavy became a pupil of Orpen's. Orpen painted a portrait of Glenavy in 1909.

In 1912, Elvery married Patrick (Gordon) Campbell who later became the 2nd Baron Glenavy. She worked in stained glass, produced illustrations for children's books and also continued to paint. Glenavy's most well-known work available online is Eire. Beatrice Glenavy and Orpen remained good friends and correspondents until shortly before Orpen's death, when excessive drinking and declining health changed his personality. Bruce Arnold interviewed Glenavy about her friendship with Orpen in his book, William Orpen: Mirror to an Age.

In 1964, Glenavy wrote Today We Will Only Gossip.

Beatrice Glenavy's collection of Orpen letters numbers forty-two separate pages. Some of the letters are double-sided, as noted on the Facsimile pages.

None of the letters are dated, nor is Glenavy's letter of Provenance dated, although Glenavy indicates the letters were likely written between 1910 and 1920. It is not known exactly when the University of Victoria purchased the letters.

The letters were written on papers of varying quality and size. Some were written on heavy graph paper, some on thin and fragile writing paper and some on heavy card stock. The largest pages are 11 x 14, with the majority being the standard letter size of 8 1/2 x 11. Many bear the letterhead of the Metropolitan School of Art or the address: 8, South Bolton Gardens, S.W.

The media in which the letters were created also varies: some of the letters are in pencil, some are in pen and ink, and some have water color washes. They are generally in very good condition, with a minor degree of creasing from when they were originally folded to be sent to Glenavy. Only one page (OR-3) has a piece missing.

Beatrice Glenavy's letters from Orpen were acquired by the University of Victoria Libraries sometime in the late 1960's.